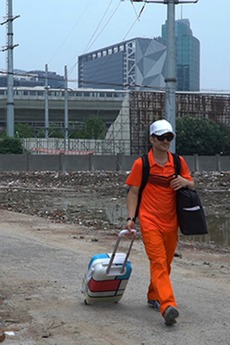 The Swap is the third chapter of the PolEc Trilogy, comprising Wandering Marxwards (1998) and The Three Failures (2006). It features the same character as in the previous episodes, but now reduced to a lost, exhausted soul roaming Shanghai's cityscape from the remotest periphery to the financial district. Another narrative, spoken this one, takes us to September 2008, as gigantic bailouts put the financial system on life support instead of letting it collapse, thus seizing our reality and replacing it with a fiction tailored for the situation. These two streams end up meeting on a Shanghai dancefloor, where unresolved contradictions can finally be performed.