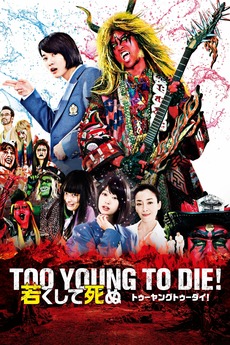 Too Young To Die!
JustWatch

Too Young To Die!

2016 ‘TOO YOUNG TO DIE! 若くして死ぬ’ Directed by Kankuro Kudo

High school student Daisuke has a crush on classmate Hiromi. On the way to a school trip, the bus with Daisuke has an accident. When Daisuke wakes up, he finds himself in Hell. He asks himself "Why only me? I'm too you young to die and I've never experienced a kiss." Then, Killer K appears in front of the confused Daisuke. Killer K leads the rock band Heruzu from Hell Agricultural High School. To return to the living and confess his feelings to Hiromi, Daisuke's hell rounds begin under Killer K's special training.

Too Young To Die! Wakakushite Shinu

Teen & other youth films from Japan.

Unrestricted, just anything Japanese you can find on Letterboxd (including tv series), updated constantly, in reverse chronological order.

Cults Around the World: Japan Edition

It's not just America who do cult movies, the rest of the world has their fair share of them too.…

This list is a reaction to lists like this one put out by the BFI. Realistically those lists should be…