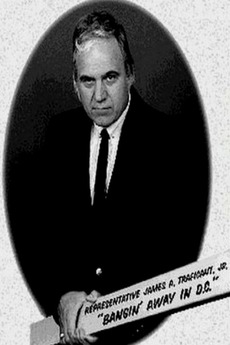 Traficant: The Congressman of Crimetown
JustWatch

Traficant: The Congressman of Crimetown

Is ex-Congressman Jim Traficant a fearless prophet targeted by a vengeful government or a mobbed-up political pariah that violated his people's trust?

Jim Traficant was a legendary quarterback turned mob busting Walking Tall Sheriff who rose to power on a platform of “honesty in politics”. He quickly ascended to the hallowed halls of Congress, becoming its most outspoken member. "Jimbo" as his die-hard supporters called him, was known for his polyester thrift store suits, shock top wigs, vulgar humor and profanity laced rhetoric against the FBI, IRS, and every president since Reagan. His one minute speeches made C-SPAN must see programming, as he signed off with his patented “Beam Me Up!” In his post-industrial hometown of Youngstown, Ohio -- dubbed Crimetown, USA for being the most mobbed up city in America -- "Jimbo" was a living legend, once garnering more than 90% of the vote. However, the eccentric maverick also had a dark side, becoming only the second Member of Congress expelled since the Civil War, eventually spending over seven years in federal prison on bribery and tax evasion charges.

every single movie the modern family cast are in