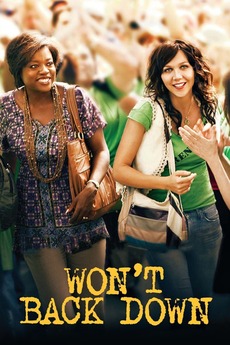 Won't Back Down
JustWatch

If you can't beat the system... change it

Jamie Fitzpatrick and Nona Alberts are two women from opposites sides of the social and economic track, but they have one thing in common: a mission to fix their community's broken school and ensure a bright future for their children. The two women refuse to let any obstacles stand in their way as they battle a bureaucracy that's hopelessly mired in traditional thinking, and they seek to re-energize a faculty that has lost its passion for teaching.

The title explains the list. Whenever I find about a new feminist movie, I'll add it in here immediately. A…

Continuing on from my list of Female Coming of Age Films, I want to compile a list of interesting female…