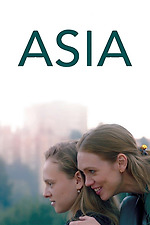 Asia (Alena Yiv) is the young single mother of the spirited teenager Vika (Shira Haas, the Emmy-nominated star of Netflix’s Unorthodox), a girl who spends her days at the skate park. Based in Israel, they are immigrants from Russia. They co-exist as roommates, barely interacting, and often clashing in their small home. But when Vika falls very ill, their relationship demands an overhaul. Asia, a nurse, can no longer treat her daughter like an acquaintance. Through the act of devoting herself to Vika, Asia reconsiders why she has always held motherhood at an arm’s length. Meanwhile, Vika contends with a deep desire for romantic and sexual experience in the face of her increasing limitations. In time, she learns to accept Asia’s unconditional love and the possibilities that arise from their new reality. Ruthy Pribar’s beautiful and moving feature debut won multiple Ophir Awards, including Best Picture, and is Israel’s entry for the 2021 Academy Award for Best International Feature Film.

Now playing in our Virtual Cinema until 1/18 as part of the 2021 New York Jewish Film Festival.

August Wilson: The Ground on Which I Stand