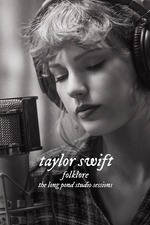 Turned this on to play in the background while I worked and just ended up... watching it.

I've struggled a lot with the Taylor persona over the years. Her unique combination of privilege and vulnerability has been hard to stomach at times, and I was pretty decidedly anti-her after 1989. But it's undeniable that she's provided a kind of soundtrack to my life.

As a Young Millennial Woman, it's pretty easy for me to mark time with Taylor Swift. My best friends and I danced around their new apartment to "Teardrops On My Guitar" just after their parents got divorced. I whisper-sang "Better Than Revenge" in my bedroom after getting my heart broken for the first time, because I hadn't told my parents about it and I didn't want them to hear. Every time I think about walking around UW campus my freshman year, "Welcome to New York" plays in my head.

Folklore is no different. For me, "illicit affairs" is taking that bend where the 5 turns into the 110 too fast, too late at night. "august" is the tile that lines the edges of my friend's pool. My favorite on the album was instantly "my tears ricochet" (which is cross stitching at 4 AM), and I laughed when they said that it was the saddest song on the album. I've known for years and years that if minds worked the way Inside Out says they do (they don't), then Sadness would be in charge of mine...

Taylor talks about how in making this album, she felt free to not be autobiographical all the time. I think that was a large part of my struggle with her; this idea that she profited off of her own pain so consistently. She felt like the same person from when I was 10 to when I was 18, but how could there be growth when the stagnation was rewarded? Why did she want me to know her so thoroughly? Why did her desire to be known feel like a wall she put up?

Lately, I've been thinking about why we share what we do. I treat Letterboxd like a diary a lot of times. What message does that send? You could read everything I write on the internet - all my tweets, instagram stories, captions, articles - and you would not know me. You can't! That's not what knowing a person is. You can't replace a connection with a curated collection of things I choose to show you. Knowing me is active, not passive.

I struggled with Taylor Swift because I thought she was trying and failing to show me who she was. But now, I'm more at peace with the understanding that I can't know her, or anyone, based on what she puts out. After all, the same is true for me.