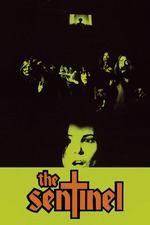 I hadn't seen "The Sentinel" in years. A strange, enjoyable, and distinctly 1970s horror, it's clearly influenced by "Rosemary's Baby" and less-so "The Exorcist," but in keeping with the strange surrealism of "Suspiria" (also released in 1977), and perhaps influential on "The Eyes of Laura Mars," which came out the following year - another film I should rewatch.

Some of the special effects are dated, the soundscape is a tad shrill, and the storyline is bizarre, but as a study in creepiness, doom, and paranoia it's definitely worth a watch. What a cast, too! Chris Sarandon, Ava Gardner, Burgess Meredith, Eli Wallach, Christoper Walken, Beverly D'Angelo, Jeff Goldblum, Herry Orbach... Sheesh! Oh, and it stars Cristina Raines.