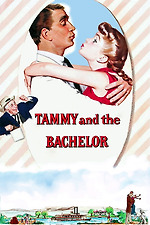 I watched this romance on a PVR recording on Turner Classic Movies.

I will be watching mostly PVR recordings a lot this month as well as Silver Screen Classics as I am rarely in a Haloween mood until about a week before the holiday and the channel I love will be airing horror films three nights a week.

This is a charming and sweet romance starring Debbie Reynolds and Leslie Nielson in the title roles.

Nielson crashes his plane near the houseboat that Reynolds and her grandfather Walter Brennon live and they nurse him to health.

Then Brennon is arrested for making corn liquer and Tammy must leave the only home she has known.

With her goatnamed Nan, Tammy travels to Neilson's large property and family who are getting ready to open the house to the public to raise money. His mother is portrayed by Fay Wray in her final film role. His aunt Mildred Natwick owns the house and has several cats - but we see only one:
an orange cat named Picasso.

Nielson has been in a long-standing relationship with a young woman named Barbara. Tammy falls for him right away.

Debbie Reynolds hit number 1 on the pop charts with the title song.

Neilson feels protective of Reynolds. He saves her honour when a friend of his takes her out, but he is at first more focused on protecting her as well as his crop of seeds. He wants the old house and property to stay in the family.

It is only when she portrays his great grandmother during the opening of the week the house is open to the public that he realizes he is in love with Tammy.

A chick flick for sure.