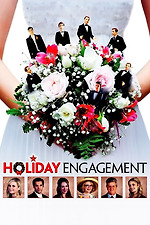 The ill fitting and ugly cloths all these actors had to wear, tsk tsk. You shouldn't have Shelley Long wearing a shirt that bunches up in front and exposes her midriff.

This was a throw back Hallmark move if I ever saw one. They just don't make 'em like this anymore. There's a lot of male flesh exposed, sex talk, a women in a bra. Any way this really isn't a Christmas movie, it all takes place at Thanksgiving with everyone putting up Christmas decorations. Your classic I got dumped and then hired an actor to pretend to be my fiancé and then maybe fall in love flick. This film is fine, tries a little too hard to be funny, and iffy acting from some, but overall it's okay.

Update:
I watched this on Amazon Prime and totally forgot I set my DVR to record this when it aired on Hallmark recently. I went in with a little fast forwarding to see if by any chance this was edited, cause Hallmark ain't like it was in 2011, and it is edited very slightly. I noticed that when the naked guy gets into bed we saw some of his bare legs, that's edited out but he's still shirtless. While the lady in the bra is still shown some of the scenes in the bridal shop were cut which makes no sense. Where they that important, don't think so. Some of the sex talk is cut down. Slight, very minor edits but I knew they wouldn't air this as is. I wonder if that's why a lot of their older catalog titles don't air anymore. You know what else I realized, somebody gave me this movie on DVD years ago and I completely blanked on it. Holy shit.

Flight 90: Disaster on the Potomac