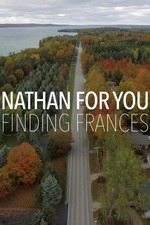 This is not what I was expecting at all, and I loved every second of it. As someone that’s been watching Nathan For You for the first time, this really solidified how good of a show it is for me. Now this isn’t going to be a series review, as this isn’t really the type of show you can give justice to by just saying it’s really funny. Finding Frances is more of a emotional finale than I was expecting and is very much a departure from the normal formatting.

For a show that is exclusively comedy based, I found it very surprising how different the tone felt. It’s a lot more somber and less sarcastic feeling. Nathan feels more genuine and isn’t just trying to set up these absurd situations like he normally does. It still has those comedic elements every once and a while of what the actual show is based off of, but this much more of a standalone send off than a finale.

I really didn’t expect the story of a old Bill Gates impersonator to hit me as hard as it did. I’m not ashamed to say that Nathan For You successfully got me to shed a tear. The actual narrative being told here really has a lot of thematic resonance and is surprisingly well told. I know Nathan is a talented and funny comedian, but I never really took him as a person that can tell a story like this. I know that most of this wasn’t scripted, or even if it was, isn’t really important to the overall themes of the finale.

I highly recommend and encourage you to check out this show. This episode is almost nothing like the rest of the series. It’s a comedy show about a guy who graduated from one of the top Canadian business schools with really good grades. The show is super funny and I feel Finding Frances is a really good send off.

I was expecting a 20 minute goofy scenario like I’ve gotten previously, instead I got a feature length story about connection and moving on. The Bill Gates impersonator has this sudden realization that what he had pictured in his mind was too late to actually happen. His lost love was happily married with all of these grand children and he was there still holding onto a relationship they had 50 years ago. It’s genuinely sad to see him go from excitement/nervousness to general sadness.

This episode also goes over a really meta aspect that was somewhat explored in earlier episodes, but not nearly to the same extent as this. What point do emotions become real, is this all just an act because they’re in front of cameras? The Bill Gates impersonator is really awkward and lives with regret because of his failed career in Hollywood. I can see why Nathan was really attached to this person over the years, even if it was just originally just to make fun of him.

I think the parts with Nathan trying to be with the escort to be the weakest part. There’s lots of awkward moments that Nathan is known for doing throughout the show, but this draws a really interesting perspective into play. Nathan is shown struggling with actual human connection because of his awkwardness, but then at the same time he has a camera crew always following him. How can you make an actual connection if it’s all for the show? I did find it’s execution to be somewhat messy, but I see what they were going for. It also has one of the most awkward yet funny kissing scenes that I’ve ever seen. I found the ending to be really cute.

I feel weird calling an episode of Nathan For You, “profound” but I’m going to do it anyway. This is a weird episode that was a really good way to send off the series. It ends on a more realistic note than I was expecting from a show like this, which probably made it a lot more impactful for me by the end of it.