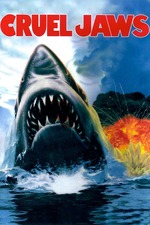 Boy… that was something alright.

All the controversy surrounding this movie and it’s Sevrin Films release going out of print it finally made me watch it.

Everyone talks about the taken footage from Jaws and other shark films but no one ever told me about the absolutes Star Wars knock off music that plays throughout the film. They should of just used some Hulk Hogan theme song ripoff music instead. Would of made it way better!

Shout out to Deadpit.com for turning me on to this one.