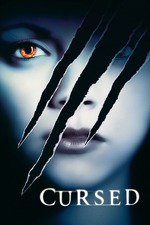 I live tweeted my thoughts while watching Cursed for the first time in 15 years. Here’s what came out of it.

• Aaaaaand…. Bowling For Soup is in the opening shot. Of course they are.

• Joshua Jackson showing off classic Horror Film sets and memorabilia to Christina Ricci is a cool scene. Honestly can’t remember if they use that location more in this film but I hope they do.

• So the whole plot line of Christina Ricci now raising Jesse Eisenberg is because their parents are dead right? Great, now all I can think of is what if in Party Of Five Scott Wolf was an actually wolf. A werewolf that is.

• Did they really do an American Werewolf In London streaking R.I.P.-off?!

• So did The WB cast this movie?

• I just saw a Hummer in the parking building of the 2005 Hollywood party.
New head canon, Vince, E, Drama, and Turtle is at the party and this is all part of the Entourage universe.

Also, Ari is totally the werewolf.

• Lance Bass and a Wax Statue of Pinhead, this is the Hellraiser sequel I’ve been waiting for!

• Worst villain reveal ever?
All over Pacey?

• Sooo werewolf decapitations cause their bodies to explode into a ball of flames like the mom in Supernatural?

Makes sense to me.

This was like a bad episode from the first season of Supernatural.

But a tad bit more gore and way worse writing. And a way way worse soundtrack.

Makes me wish Sam and Dean would of shown up and taken out Pacey in the first half and saved us all some time.