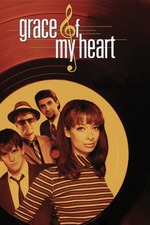 Underseen and underrated this Alison Anders music saga despite help from producer Martin Scorcese and editor Thelma Schoomaker this didn't make much of a theatrical splash, but has since gained its own admirers over the years.It's not perfect but it has so much going for it most notably Oscar worthy turns from Illeanna Douglas and John Turturro that I wouldn't hesitate to recommend it to anybody.

You can definitely feel the Scorcese/Schoomaker influence in how well this film crosses time periods and introduces and removes characters over Douglas's journey through the music industry. This is where Douglas in a rare lead role really shines, the first time we we see her we don't see a star in the making, she seems shy unsure of herself. But as the movie transpires and we see her move from writing for others to eventually taking the spotlight herself we learn just how strong she is, it's a beautiful transition and yeah I got teary at the end.

If I were to point out one part of the movie that could have been better it would be the performance sequences. It's not that the songs are bad their quite good, it's just the way their shot brings no visual energy to the performances, and although I didn't expect Douglas to be really singing in the movie I thought they could have made the lip syncing less obvious. I did just binge watch Lee Daniel's epic "Empire" tv show and the excitement he brings to each song number may have spoiled me. Still as I said before minor quibbles aside this is a very good film that music and movie fans will continue to come around to and enjoy.