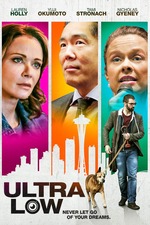 If you were a space alien watching this with no idea of what movies are, you'd think the making of them primarily dealt with the purchasing of shares, bank transactions, and navigating the treacherous waters of digital piracy. But in this autobiographical flick, in which the director stars as himself struggling in the all-too-relatable quest to "break in," not once are we shown anything expressing the joy, love, or exuberance of filmmaking.

Nowhere are we made to feel like cinema is a rewarding pursuit. In fact, this film would have you think that it ISN'T a rewarding pursuit unless you make it to the big leagues. 5-plus minutes is devoted at the beginning to an onscreen bitch-fest between a bunch of 30-something (40-something?), flat-cap donning film bros perplexed and deflated by their perceived disconnect between festival rejection letters and audiences heaping them with hyperbolic praise (for most normal people, the one to be suspicious of is the latter). The scene is devoid of irony and any attempts at humor had the effect of making me wince. In retrospect, it sets the tone quite well.

The few moments this movie even acknowledges that there can be a creative thrill, lightning-in-a-bottle magic to filmmaking are fleeting at best, to the point where it becomes obvious that the writer/director is undervaluing the very artform he supposedly loves. It’s also clear that the people behind this see movies as little more than commodities — vehicles by which to achieve fame and fortune for no other reason than to have fame and fortune. That we’re meant to empathize with a supposedly struggling indie filmmaker while he’s driving around in a red BMW and going back to his Seattle one bedroom (any sense of the great city's milieu is sadly absent from this film despite some glimpses at the skyline) make this feel more like a spectacle of the pathologically narcissistic.

The film, from its settings to its dialogue, is textureless, stilted, and sterile. Overshot and over-edited like a student film, it clocks in just shy of 2 hours — a mind-numbing length for something that could be more effectively expressed in 10 minutes. As a fifth feature, this is a misbegotten Hail Mary. As a vanity project, it's at least fascinating — the last gasps of a mediocre talent coming to grips with his own mediocrity after being surrounded by cheerleaders for his entire life.

It's worth noting that the actor/director, in a moment so portentously acted and absurd it feels like satire, depicts himself seeing talent in a homeless person and giving him the inspiration to turn his life around.

The King of Staten Island