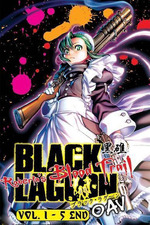 Demon Slayer With A Dragonslayer’s review published on Letterboxd:

My biggest dream right now that a lot of anime has been coming out lately is that "Black Lagoon" will be added someday so I can put it as my 3rd favorite out of my 4 favorite works on my profile.

It is one of my favorite shows ever made and one that is just soooooooooo much fun to watch and that it is also a show that does a lot more than just being one of the most entertaining pieces ever made. It's a really great story that both shows how people romanticize crime while also showing the darkness and consequences behind becoming part of this life. How the past can influence us in who we become as human beings, morality, the slow descent of one losing his/her humanity and history and politics relating to war, patriotism, ideals, honor, etc. It's a show that both entertains you and makes you think of what it has to express. And of course, characters are absolutely fantastic, unique and have a lot of chemistry. Even some of the most minor characters have personality and bring a lot of enjoyment to the screen. What I also love about it are the female characters. They are actually very well And have a lot of personality unlike a lot of female characters in not just anime but fiction. Not to mention that it is so relieving that they are not sexualized, not even Revy despite being in shorts and a half tanktop. You actually care about them. And the dialogue is just... perfect. Natural, hilarious and even revealing a lot of what the characters believe and who they are in a way that is sometimes subtle. And of course, not only the best English Dub ever but among the very best voice acting in any anime.

Please, Letterboxd. Please, just add it here for me. You would make this place a lot more fun if you just added more shows in here. Let's not limit to just some shows and the rest, movies. Let's add everything.

O.J.: Made in America