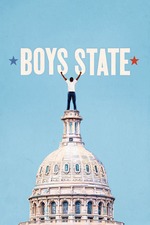 the four kids highlighted in BOYS STATE are very multidimensional characters. none of them seem like inherently bad people, even if i don't agree with some of their views. i'm seeing a lot of steven and rené idolatry on this site which i understand because they're both such compelling characters, but i also don't agree 100% with either of them, and i'm personally capable of acknowledging that and not feeling the need to stan them. seeing public reception of these boys just makes me wonder why we feel so compelled to stan politicians in general and where we need to draw the line. we should be able to put things in perspective and understand that politicians, for the most part, are in it for the power, not for the people. the way that rob, specifically, discusses politics in this doc was very fascinating to me and even though he seems like a loud, possibly unintelligent character at first glance, i think he unknowingly says some of the most profound stuff in the whole film.