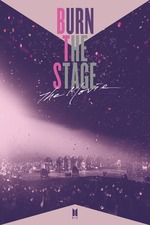 Burn the Stage: The Movie

i haven't watched a movie for almost two weeks and that's because 1) i've been Going Through It (we're in a pandemic) and 2) i became a bts fan eight entire days ago and that's been taking up a ton of my time!

i've watched a ton of bts content in the past week, so i think the following opinion is at least somewhat informed. it seems to me that the primary appeal of bts is the perfection and polish of their performances juxtaposed with their more unpolished, unfiltered personalities. i don't think this documentary captures either of those things very well. there's not much performance footage, and whenever any performance b-roll does occur, the cinematography makes such little sense and there are so many cuts that the viewer's eye can't linger on literally anything. give me some wide shots that last longer than 5 seconds! please! bts films their own pandemic-era "live" performances better than this. regarding their personalities, there are certainly moments that seem candid or emotionally vulnerable, but the extremely melodramatic, scripted narration puts a damper on the whole thing. i didn't feel that the members were being 100% themselves; i get more honesty out of their youtube videos than from this film.

that being said... i love them so much and this was fun to watch! but i sure hope their other films are better than this, because oof!