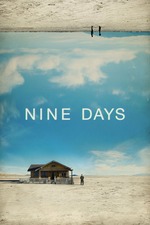 there's something just so breathtaking about this whole experience. if i had watched this in a theater my rating would probably be a 4.5. i think NINE DAYS is meant to be as immersive an experience as possible and watching it on a laptop was not that, so i look forward to hopefully seeing this on a big screen sometime.

some elements of this fall flat for me / don't feel completely necessary and that's likely because there are just so many ideas thrown around in this film, ideas that occasionally don't synthesize with one another. honestly NINE DAYS could've been a tight 90 if some of these ideas were trimmed, and it'd be a stunning, brilliant tight 90.

when i think about winston duke, the first thing that comes to mind is his excellent comedic timing in jordan peele's US, so it gave me such strong emotional whiplash to see him in a very dramatic role here. i had no idea he had this kind of range. mr duke please accept my apology for underestimating you. i will now begin my quest to become a winston duke completist. his performance wasn't perfect but i loved it anyway!

anyway i'm excited for NINE DAYS to be officially released sometime this year!! keep an eye out!

edit: WAIT I HAVE TO MENTION... this is edson oda's directorial debut!! this is an UNHINGED debut. major props to him and i'm excited to see what he does next.