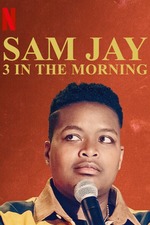 Sam Jay: 3 in the Morning

this was honestly such a fucking let-down. i feel like sam jay must've MAJORED in the practice of repeatedly saying "i'm not saying [insert bad or bigoted thing here] but-" and then proceeding to say something extremely questionable that basically shows that she does have some internalized bullshit to work through. she's at least a little bit transphobic throughout a lot of this special, and then has the audacity to be like, "i'm not saying trans women aren't women though, because they are." okay great! just goes to show that a person can think they believe something and then prove that they're actually still at least a little bit bigoted? she played herself lol.

also, she talked shit about the woman who accused aziz ansari of sexual assault and i simply do not fuck with that. i don't. i take that extremely seriously because a lot of my past trauma is very very similar to what happened to that woman, and i've heard far too many people talk about how it wasn't real assault or whatever. so to hear that in a COMEDY special that was already leaving a bad taste in my mouth? honestly disgusting, and i hate to be so harsh about this and swear so much in a review on letterboxd dot com, but this really does get me madder than anything else, period. that aside, there were obviously a few bits which warranted my 2.5 star rating. but on the whole, i really felt gross watching a lot of this. most comedians truly don't know what they're doing, huh. lmao

edit: you know what i actually want to fully acknowledge what sam jay said about aziz ansari's accuser and victims of assault in general. she basically said she doesn't understand why women don't just fight the people who are assaulting them lmao. are you kidding? when i was getting ASSAULTED in HIGH SCHOOL, i did not realize it was assault until a full 2 years later. LITERALLY. it took TWO years for me to understand what had happened to me. does sam jay want me and aziz ansari's accuser to go BACK in time and fight the men who assaulted us? it just shows SUCH a basic misunderstanding / ignorance of what it's like to be a survivor, and i have no patience for that. okay i'm done

How Did They Ever Make a Movie of…