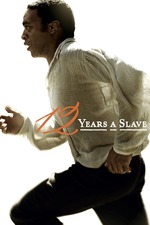 Las Vegas Weekly review. Better than I expected, as odd as that may sound given the overwhelming acclaim—it seemed likely to trigger my well-known allergy to victimization narratives, which I contend are fundamentally anti-dramatic. Only partially falls into that trap, thankfully (key line: "I don't want to survive. I want to live"), and I cried and shuddered in all the right places. Still, there's nothing even remotely challenging or unexpected here, and McQueen's so awed by his subject that he even forgoes his usual creepy aestheticization (though he can't resist some stunning shots through a moving paddle wheel) and kinda turns into Norman Jewison or somebody.

Here's the linked review (lest it vanish from their site someday):

Victims make the least compelling protagonists—unless they have some degree of agency, there’s nothing to do but feel sorry for them. So it’s a relief when Solomon Northup (Chiwetel Ejiofor), the title character of 12 Years a Slave, hisses his defiance at a fellow prisoner who’s urging him to keep his mouth shut and his head down. “I don’t want to survive,” Solomon insists. “I want to live.” Over the course of the next dozen years, Solomon’s ratio of living to surviving isn’t what you’d call ideal, but he’s enough of a fighter to prevent this harrowing, oft-brutal drama from becoming completely mired in voyeuristic misery.

Sadly, it’s all based on a true story. In 1841, Solomon was a free man with a wife and two children, working as a violinist in New York. Lured to Washington, D.C. (a slave “state”) on the pretext of a brief performing gig, he was drugged, kidnapped, renamed and sold into bondage—first to a relatively kind owner (Benedict Cumberbatch), then to a sadistic taskmaster (Michael Fassbender). Escape was all but impossible, and even admitting that he was an educated man who knew how to read and write could potentially get him killed. Nonetheless, Solomon never stopped searching for ways to alert his family to his plight, and eventually, with the courageous help of a Canadian carpenter (Brad Pitt), freedom rang.

To those who’ve followed the career of director Steve McQueen (no relation to the late actor), the most remarkable thing about 12 Years a Slave is how conventional it is. McQueen’s debut feature, Hunger, was also a historical narrative, but that film refracted Bobby Sands’ hunger strike through a series of dazzling abstract images, and also employed a deliberately asymmetrical three-part structure. McQueen’s Shame, too, was aggressively visual and dramatically oblique, for better and worse. Maybe he felt that slavery was too momentous a subject to be aestheticized in that way. In any case, he and screenwriter John Ridley (Red Tails) keep things simple and direct, only occasionally allowing striking images, like the glowing embers of a burned letter, to take precedence over the basic emotional beats of Solomon’s lengthy ordeal.

In the film’s most extraordinary moment, a despairing Solomon looks directly into the camera, as if asking those of us in the audience how we can sit there and dispassionately consume his pain. Few viewers will have a ready answer, apart from the duty to stare our country’s shameful legacy square in the face now and then, acknowledging that it happened. Like Schindler’s List, to which it’s frequently been compared, 12 Years a Slave tells a story with a somewhat happy ending, but never loses sight of how many others met a much sadder fate. (Bear in mind that Solomon could be freed only because he had started out as free, which was an accident of his birth. For most African-Americans on plantations, it was 75 years a slave.) As both drama and cinema, the film is merely solid, impressive. As a cultural object, however, it’s essential.