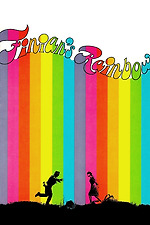 Fascinating to watch Coppola chafe at the Hollywood musical's conventions, and the movie repeatedly toggle between blatantly artificial sets and the Napa Valley. On the Town took the genre on location decades earlier, but it's still kinda remarkable to see Astaire, pushing 70, hoof his way over legitimately uneven ground—wonder what his insurance looked like. Show itself isn't great, with "Old Devil Moon" the only truly classic song (listen to someone as gifted as Petula Clark perform it and marvel anew at Sinatra's unmatched phrasing); I can imagine a less irritating Og than Tommy Steele, but not a version in which I don't wish that character would scamper on back to Ireland. However, I'd been unaware—partly, to be honest, because I've always confused it in my head with Brigadoon—that Finian's Rainbow rivals Show Boat for clumsy but valiant pre-Brown v. Board efforts to put bigots in their place. It's unfortunate that the finale here hinges on restoring Keenan Wynn's whiteness, but few moments from this era of cinema history feel more ruthless than Al Freeman, Jr. slowly, slowly mock-shuffling his way toward the camera, using the grotesque stereotype that's been imposed upon him to prolong the Senator's suffering as much as possible. Even for 1968, that's some potent shit, and it appears to come straight from the '47 text. Still, nobody could possibly have imagined that this film's director, just four years later, would make what is widely regarded as one of the greatest films of all time. It's as if Kubrick had served up Paths of Glory a mere four years after Fear and Desire. Oh, wait.