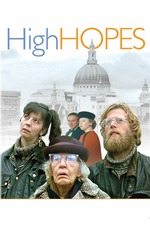 After the general election here in the UK earlier this month, whilst feeing disappointment, anger, and hopelessness, I found myself recognising an immense relatability to this overlooked treasure by Mike Leigh.

Touching upon issues of generational relations and the complex system of class in the UK - especially with the then more recent introduction of the middle class - High Hopes traverses the mundanity of inner-London in the midst of a brutal Tory government. Drawing a variety of parallels between different characters and their class background and current position, High Hopes probes the conflicts that exist between class. Helped by the expected great cast and witty dialogue of a Mike Leigh film.

I can confidently predict myself returning to High Hopes many more times, especially within the next five years, and it quickly rising the ranks of Mike Leigh’s impeccable oeuvre.