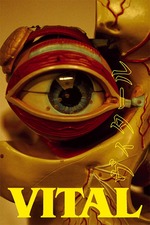 What is life without memory? What is death without remembrance? How can you live when your nature is dead and how can you die when your body remains?

First off, that's my boy, Tadanobu Asano killing it as the lead.
Second, fuck, Tsukamoto did a real number on me.

Here Tsukamoto's themes of people, living beings, within the city, unnatural and inanimate, body horror, and conflict aroused by the dichotomy of being inside the world against our human needs collide into a potently thoughtful rumination that hits so hard. So so hard.

This is the marriage of Tetsuo and Bullet Ballet but not in whatever way your mind just imagined.

Takagi has just awaken from a car accident. His memory completely erased. His girlfriend dead. He finds his medical books (he was an aspiring doctor) and pieces of that memory come flooding back. So he goes back to medical school. In his dissection course he finds that his deceased girlfriend is the cadaver he is working on. That's some fucked up shit.

He of course doesn't know it's his girlfriend at first because of his memory but this is where Tsukamoto's body horror fixation comes in in a very not at all horror exploration of body.
Cronenberg's body horror films led us into explorations of how the body contains the soul and our essence. That to destroy the body was to change the person and all the social impacts such an event can cause while inviting self-exploration. Tsukamoto used body horror in Tetsuo to show how mechanical the subjects life was becoming. The eradication of the self and the actualization of something new. The merging of person and modern city life. But now Tsukamoto has a different exploration in mind.

As Takagi dissects and analyzes his girlfriend's corpse he begins unlocking memories. But they aren't his memories and at one point they become not memories at all. What are they? They are the symbols of which we are to interpret that the body holds all our secrets. By exploring the body we can only them truly know a person even if we knew them in life. Do we really know someone? Can we know someone better? The answer is yes and Takagi undertakes that journey.

The film is not grotesque or perverse. A shocking admission to many who have seen some of his earlier work. It is highly contemplative, reserved, and introspective. It's also sad as fuck. The ending really hit. My heart sunk but not in a hopeless or lost way. It ached with beauty and resonance.

There's a scene when Takagi first remembers Ryoko and goes to her parents house. Jun Kunimura plays her father and he fucked me up. Such a powerful and intense scene that leads into a series of interactions that develop and shift until the film's end and it's the most beautiful and real thing. How can we truly grieve for a loss when we aren't consumed by their memory? What does it mean to be consumed by their memory?

I just don't have enough words. I would need to rewatch the film and constantly pause it to write down notes and thoughts and analysis in order to get everything lined up and put down on paper. Or I can just do like all the kids these days and sum it up succinctly and just as powerfully: all the feels.

A Snake of June