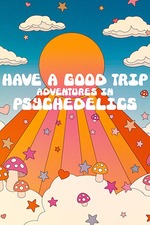 Have a Good Trip: Adventures in Psychedelics

Have a Good Trip: Adventures in Psychedelics 2020 ★½

I mean, this was basically a clip show of talk show interview tidbits, with ~trippy~ graphics added for transitions. It’s a lazy cable channel special, this “Celebrity Ghost Drug Stories” vibe. I like a lot of these stars! But that doesn’t mean this gave me much to chew on! It’s split into story-chapters for every star that are short and edited to death. Carrie Fisher (RIP) has a segment in particular which is handled incomprehensibly, basically cutting her off and never giving her a chance to make her point.

I just have stray thoughts because I got a little drunk watching this, but: Deepak Chopra should have been featured a lot more heavily; the little Adam Scott after-school-special scenes were cute; Rosie Perez’s story would make a pretty great short film; I nodded off during the flat-tire stuff probably because they were the only stars I didn’t recognize (I’m part of the problem); god, I love A$AP. And, well, that’s all I got!