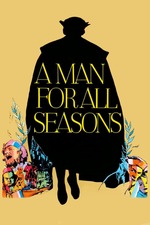 A Man for All Seasons

Paul Scofield's performance as Thomas More is clearly the standout here, and what helps elevate the film above the mediocre. A Man for All Seasons looks fine with a few solid cinematographic touchs (such as the seasons passing through the window of More's cell in the Tower of London), but over all nothing stands out. The script suffers a bit from its rushed nature as well; being familiar with More's biography I was able to fill in the blanks, but the gaps in his career (More seems to resign from his Chancellorship mere days or at most weeks after accepting it, when in reality he served for three years).

Biopics are always a difficult proposition; a director and writer are left with the decision of covering a brief moment in a person's life in detail, perhaps losing the context, or covering the entirety of his or her life at the risk of losing focus. A Man for All Seasons falls somewhere in between; it is definitely focused on More's vexed relationship with Henry VIII, but it skips large chunks of More's life, losing the context.

Guardians of the Galaxy

Anatomy of a Murder