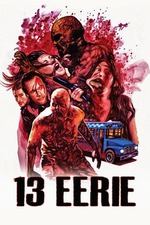 Lee, or El Duderino, if, you're not into the whole brevity thing’s review published on Letterboxd:

"This place is one stop from hell!"

The Night of the Living Dead by way of Fede Álvarez's Evil Dead. 13 Eerie features a largely unknown cast, with the exceptions of the disappeared Nick Moran and American Mary herself, Katharine Isabelle. It centers around a group of forensic science graduate students on a hands-on investigative exam, set in a shut down and supposedly abandoned prison. Unbeknownst to the students and professor, said prison housed illegal experimentation on death row inmates. The plot is very basic despite having bad the chance to dig more into the suspense and tension. Similarly, the pacing is rather slow for a film that ultimately results in just being seen for the deaths. The rest plays out as a rather generic straight to DVD zombie movie, akin to a Call of Duty Zombies match on round 20+ with pistols only. The real highlight here is the terrific practical effects gore, boasting a handful of awesome kills. Ranging from split eyeballs, torn flesh, to ripped open stomachs, any fellow fan of gory kills, should feel welcome. Even after the credits rolled, it only dawned on me as I logged the movie, that this is the same director from modern cult classic, Wolf Cop.