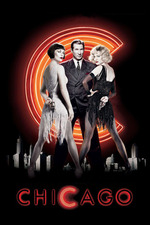 Not Another 30 Day Film Challenge: Day Fifteen, A Film that You Wish Could be the Story of Your Life.

I find it incredibly difficult to find a film I love so much to the point where I wish that it was my life story. Characters in films are usually meant to be put into predicaments that the audience would not particularly want to find themselves in. Some of the set pieces and characters in the films, however, may make viewers desire to become a part of the story itself. Chicago, in particular, is a musical that I have had a desire to perform in for the longest time. I don't know who I'd play (probably John C. Reilly's character), but I don't care. All I want to do is be in this musical and sing on stage. (I have the experience, after all.)

Chicago takes place in the roaring 1920's, where we focus on two murderesses who are constantly at odds over a famous lawyer who is guaranteed to make them lovable and convincing enough to get them off scot-free. Velma Kelly (Catherine Zeta-Jones) is a cabaret singer who murdered her sister and husband after finding them sleeping together. Roxie Hart (Renée Zellweger) is a housewife who murdered her lover after she was duped into believing he would make her a Vaudeville star. Both of them vie for the services of Billy Flynn (Richard Gere), whom works on both of their cases. Flynn turns Roxie into a sympathetic farm girl, giving her a fictitious backstory to make her more appealing to the public eye. Each part of this spectacular story is set to the backdrop of the roaring twenties, complete with many dazzling musical numbers that astound me each and every time I watch them.

Each and every actor in the film has an amazing singing voice. On these actors' outward appearances, I would not have begun to guess that they would be able to sing the way they do in this film. Yet, lo and behold, here we see them singing their hearts out. They really do a far more spectacular job than Hugh Jackman and Russell Crowe in the 2012 adaptation of the Les Miserables musical. While I still love that film, I can't get past Jackman's terrible singing voice. Chicago's spectacularly flashy 1920's era set pieces far outshine the droll, dark, depressing pieces in Les Mis (although I understand that's the point of the film), and it just captivates me so much more than the latter (although who can deny Anne Hathaway's knockout solo performance?).

Although I certainly wouldn't want to put myself into the main characters' situations, I wouldn't mind possessing the naturally suave personality of Billy Flynn. If I were to perform in a stage production of Chicago, he would be my dream role. I love the song "Razzle Dazzle," and it would be a dream come true to perform it in front of a live audience, in addition to the other songs that Flynn takes part in. I have only seen this film adaptation of the stage musical, but I have no doubt that the original musical is just as spectacular. It really would be the experience of a lifetime, just as this film is to me.