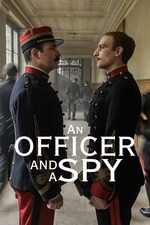 The (rather too obvious) subtext of this, namely that Polanski’s own situation (being in hiding from American authorities since 1978, when he was indicted on six criminal charges, including those of rape of a 13-year-old girl, with the threat of trial hanging over him still, etc) is analogous to that of Dreyfus’ predicament is quite preposterous.

French Artillery Officer Alfred Dreyfus was the victim of one of the most notorious miscarriages of justice in French history (resulting in wrongful internment in isolation in a small island in the middle of nowhere, predictably called the devil’s island) and its fallout and eventual resolution, in the period between 1894 and 1906.

In Polanski’s version, sometime after Dreyfuss’s conviction, George Picquart, the recently appointed Chief of the army’s intelligence section (euphemistically called the Department of Statistics), intercepts information suggesting a different military man committed high treason by betraying French military secrets to the Germans. Picquart whistle blows and quickly discovers that his is a version of events that no one wants to hear. The mendacious establishment snarls and bears teeth like a cornered beast at the suggestion something was amiss in Dreyfuss’ sentencing.

The film is loaded with great actors as well as the really inscrutable Jean Dujardin in the role as Picquart, but they’re not given much to do and therefore, essentially, they are wasted. And even though the Dreyfuss affair is quite fascinating, full of intriguing twists and turns that make it ripe for a big screen retelling, somehow J’Accuse remains limp and flaccid pretty much throughout. It is also pretty uneven as while some sections drag, others zip along. At the same time it is pretty competently put together (come on, it’s Polanski ffs!) and pretty evocative of the time and of the simmering anti-semitism which was brewing in France at the time.

So, J’Accuse is a stately film, albeit one that is generally rather uninspired and, well, dull.