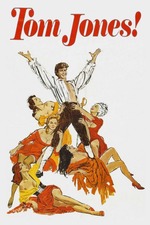 People seem to have difficulty imagining how this can have won Best Picture, but to me it's pretty clear: not so much the seemingly obvious fact that it's an adaptation of a revered literary work as the fact that it was a massive popular hit, outgrossed only by Cleopatra, How the West Was Won and It's a Mad... World in 1963 (this makes it a relic of a long-forgotten time when the Academy was interested in commercial success), while in its raunchiness and freewheeling playfulness (it liberally mixes handheld camerawork, silent-film homages and fourth-wall breaks) it captured the filmmaking zeitgeist like nothing else at the Oscars that year.

As to whether it holds up now - I think it just about does. For a purported comedy it's not very funny, and I'd be lying if I said that it didn't overstay its welcome at 128 minutes (I watched the full theatrical version which the Criterion Channel has up alongside the wider-seen shortened cut), but this is far from the irretrievably dated nightmare Letterboxd had primed me for. I haven't read Fielding's novel but I'm familiar with the general tenor of English fiction of that period, and one of the key strengths of Tony Richardson and John Osborne's adaptation is that it replicates the grubby, sexually frank ethos underpinning a lot of that literature. It's a period piece that refuses to polish itself up and be genteel (unlike so many other entries in its genre), and a cast crammed with familiar faces from British cinema brings the scandalous earthiness to vivid life.