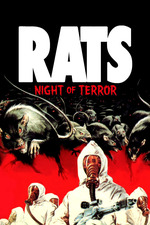 I wasn’t expecting a post Mad Max Italian flick from the poster and title, but I’m sure glad it is. The atmosphere and aesthetics are on point. Blue lit fog. Shadows slowly revealing red eyed rodents stalking the concrete streets. Some of the cinematography is better than I think most people will give it credit for. It’s weirdly unique for a genre film like this, such a strange mash up of ideas. Claudio Fragasso and Bruno Mateii are like best buds and I love it.

Some of the gags whether intentional or not are hilarious. A rat getting hit by a glass slid across a bar table made me burst out laughing. If it was a real rat, that’s kinda mean, but still I can’t deny the abruptness of it got a good laugh out of me. There’s lots of little stuff like that throughout the film whether it’s silly moments like that or awkward delivery of certain lines. All the character names are kinda silly too and have some weird mythological/biblical/honestly who knows what type theming. You got Video, Lucifer, Duke, Taurus, Diana, Lilith, Kurt, Deus, Noah, Myrna and the only black character named Chocolate. I know smh lol. To be fair, she’s pretty badass and seems like in this post apocalyptic world she’d name herself that anyway and embrace it. She’s my favorite.

Dicks, boobs, ass, its all here without shame. Sweaty, dirty, dingy, hairy, dusty, pure unabashed filth. A perfect pulsating bleak sounding score accompanies the film and it works wonders to compliment every scene it’s in. A rat crawls up a vagina and kills a women from the inside and then crawls out of her mouth. Not many movies can say they did that. I love how these characters after getting picked off one by one by rats like a slasher film actually come to the conclusion that the rats have some evil motives. How about they just have a disease or were experimented on, that sounds infinitely more reasonable. In the end their theory was sort of right but still. These aren’t the smartest bunch, but I love them all except Duke. I just want to see them go on more wacky adventures. The ending is the greatest thing ever by the way.

This is one of Kaijuman’s favorite films and I think it might just become one of mine. Thanks for posting that list of favorites buddy, I’m gonna definitely check out more. Your taste is the best.

The Perfume of the Lady in Black