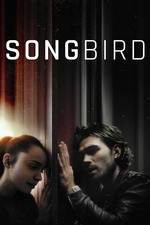 I got really high and watched a preview of this so I’m going to just post all of the messages I wrote to a group chat that absolutely did not ask or care for my opinion on this movie.

>So far? Songbird looks terrible
>It was spot on a Komodo with laowa lenses
>So far all handheld and all bad
>Covid 23
>Got to see kJ Ana’s butt
>So far so good
>There’s a wounded warrior subplot with a guy in a wheelchair falling in love with an e-girl
>Does anybody here care about spoilers from this movie
>Peter stormare is just walking around in the streets and is in charge of the department of sanitation but he just stabbed a guy in the street?
>There was one shot where they mounted a Komodo to KJ’s helmet and it actually looked incredibly good
>They got one shot in there, good for them
>Bruh in this movie covids been around for like years and now this girl’s aunt is sick and tells the lead girl not to come in because she’ll die
>And the lead girls like no I’m gonna help you
>But like? We knew not to do that after day 4 of this virus
>It’s supposed to be a morality thing but it just plays as stupid
>Also there was like? Some dead pixels on the screen for a hot second that nobody fixed
I know this was shot on a beta Komodo but
>Nobody noticed? Really ?
>Also kj is surprisingly charming in this
>So far this movie, even though it has a lot of characters, had connected stories and no individual plot like requires more than like 4 people on screen at a time
>With this shitty lighting I’d believe they had like a student film sized crew on this
>This guy is cheating on his wife with this prostitute and is 100% going to get sick and gonna get her immunodeficient daughter sick
>I think this movie is gonna end with everybody dying
>This feels incredibly in poor taste
>I think kj apa is trying to get his possibly sick girlfriend out of quarantine to take her to a place in Big Sur where there is no virus and I think he’s gonna infect all of them
>But I think we’re supposed to be rooting for him?
>Here’s the problem though:
I think kj apa is a good actor
>I guess this movie was filmed before they realized that bandannas aren’t masks, this girl is talking to her dying aunt with one on like nbd
>this leather jacket is sick tho
>Peter stormare was just singing opera in a bathroom?
>PETER STORMARE JUST STABBED KJ APA
>I have no idea where this is going
>Ok some new guy who looks like joe managiello if joe managiello had Karl Urban’s eyebrows just showed up out of nowhere and shot a bunch of people?
>They keep accidentally setting up things that could go really bad and I don’t think they’re gonna have the gall to do anything about any of them
>“This concept would be interesting if the deaths of 300,000 people weren’t hanging over our heads.” -My Roommate
>Kj apa just broke into Demi Moore’s house and there’s a whole thing like covid is airborne and she said he’s threatening her daughters life by being there and yet she’s not wearing a mask
>I was hoping Paul Walter gauzes was gonna use his drone to assassinate someone and he 100% just did and that was incredible
>The dad from get out was tryna Murder Alexandra daddario and he got fucking sniped
>Oh! Surprise! KJ’s possibly sick girlfriend is immune! So he can escape with her and not endanger everybody else on earth!
>Peter stormare is chewing up scenery the same way he did in Until Dawn and I’m kinda here for jt
>What type of message is this movie trying to make
>Remember when I said they’re setting up fun weapons? Kj apa delivered pencils in act 1 and kj apa just stabbed peter stormare with a pencil right through the neck
>Is this movie... smart?
Or am I just really high?
>Everybody is connected
It’s like Crash
But this time the pandemic is covid, not racism
Which again, makes me wonder if this movie is making an anti-BLM statement?
>Kj managed to slip the bootleg immunity band on his girlfriend just in time for them both to not get shot
But she... actually is immune? So that feels like they could have ended that storyline 10 minutes ago
>Aw they’re kissing for the first time
Beautiful
>So they got Craig Robinson an immunity band as a gift
But he’s not immune
But he’s gonna leave the quarantine zone? So he’s gonna either get sick or get other people sick?
>Also the maid went home to her family after a possible exposure?
>And then the movie ended
>Are we supposed to route for these characters? Like, they’re people that are breaking quarantine and are endangering themselves and others and only 2 of them are immune
>Who are the heroes here
And what is this movie trying to say about the world we’re currently living in
>I give it 2.2/5 stars