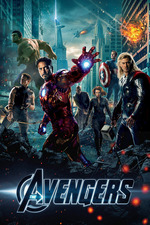 Big statement I know, but finally getting around to rewatching this, and especially after watching the films leading up to it, this holds up so well.

For me, this has so many of things that some of the early MCU films lack, this feels like it genuinely has weight, and actual stakes. Maybe this is my nostalgia talking as I have fond memories of watching this when it was released with my Dad at The Astor Theatre in Melbourne, a few rewatches of a pirated DVD my good friend Spencer brought back from Thailand for me back when I was 13 or 14.

I feel like all the characters here have their moments, they have time to breathe, something meaningful to do, and I think thats an extrodinary achievement given how many there are in this film. They all feel like they're at their best.

I'm repeating myself, but everything here feels like it has genuine weight, it's just something that sticks with me. For example, Captain America's war flashbacks don't exactly portray war as a fun shoot em up like it was in his first film, while the transformation of the Hulk genuinely feels so nerve racking. Loki actually feels dangerous. The combination of digital visual effects and practical effects works so well for me in this. Some of those Hulk shots on the air ship are SO BLOODY GOOD!

My only minor criticisms involve your classic Marvel plot contrivances (Loki falling off a balcony to be caught by one of the aliens) for one, and the demise of a certain character feeling like it has a little too much emotional weight. I can also agree that perhaps the fight in New York goes on a little too long, but hey, it's a fun time, so it doesn't really bother me. How bloody epic is the Avengers Theme in the soundtrack. One of the few times a Marvel film has produced a truly memorable score moment. Also, I think the humour actually hits every time here. I'll never forget the whole Astor crowd laughing as the guy on the bridge of the airship goes back to playing video games. One of those memories burnt into my head from my childhood, that when I look back now, probably was quite formative in my life of cinema, witnessing its magic in giving people a shared experience, emotion, reason to smile.

I think I'm justified in giving this such a high rating, as this would be the third or fourth or maybe even fifth or sixth time I've watched this, and it still bloody holds up!!!!