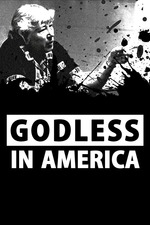 Having recently watched The Most Hated Woman in America on Netflix I was intrigued to find out more without the window dressing of a half baked screenplay and mostly middling performances. Leslie Woodhead's Godless in America is a bare-bones investigation into Madalyn Murray O'Hair and American Atheists.

Chipping in at just under an hour, some of the most interesting sections in this documentary are when the filmmakers discuss the historical factors involved in the separation of church and state, the religious fervour that rose during the Cold War and the American Atheists continued struggle in the 21st Century.

Sadly, the runtime doesn't allow for a more in-depth analysis on the subject and the doc doesn't know whether it wants to be a grizzly, crime special or a detailed piece on Atheism within a modern America. The fact that the atheists filmed all seem to treat their anti-religious stance as a form of religion seems like a keen observation sorely missed here.

I'd have preferred a feature length version of this documentary over the Netflix movie. It gives scant insight into the atheist movement but fails to deliver more than a puff-piece on the subject.

The Man with the Golden Gun