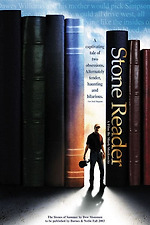 John (no the other one)’s review published on Letterboxd:

I am just shy of halfway through my first John Barth and should definitely have been spending time with that instead but here we are. I should mention that I came here completely on the spur of the moment having read a review (no guesswork needed: it’s the only review of this I will have liked) and decided you know...this may be the one. Now maybe (certainly) I’m allowing my sentimental side to get the better of me here, and this sort of thing is admittedly right up my alley, but I can’t really push back too much against the abiding truth here, no matter how mechanical the form may be, complete with the treacly, maudlin library music, etc.

I will admit that I haven’t read Gaddis or Heller or really any of the weird, “hard” American fiction at issue, but I have spent time agonizing with my man @lowshun about how it is that I as an American can defend a love of fiction as an art form when I am outspokenly and maybe not unjustifiably disdainful of creative types and above all suspicious of their usefulness to anything politically liberating or emancipatory in American culture. After all, as my man put it, “Did a novel ever change anyone’s catheter?” I remain sympathetic to these scruples, but as Leslie Fiedler puts it in the film, the truth is that the unswerving questions of politics almost don’t seem a match for the enormity of how un-alone you can feel as the “co-creator” of a novel you’re reading. It’s not to say that politics are made unnecessary, but that fiction can treat the illness without necessarily naming its symptoms.

Now if I were a really eggheaded academic type, I’m sure I could also talk some bullshit about how the documentary form itself here constitutes a sort of neorealist metafiction but I honestly don’t think that really matters, especially in light of some of the stuff about work and how it is that America treats its artists, the stuff about Updike and how writing shouldn’t be a profession, etc. Fiction is its own magic that film and other art forms never could be: as this guy says, it is a place within a place, it’s not just your connection to the author and to a story of yourself, but—as trite as it is to say—to the interiority and richness of other people’s lives. And if you’re going to make mistakes, let them be in a move toward  compassion and understanding, not self satisfied positivism.

John (no the other one) liked this review

John (no the other one) is using Letterboxd to share film reviews and lists with friends. Join here.

John (no the other one)’s films