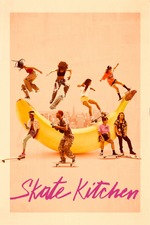 Crystal Moselle’s previous film, the documentary The Wolfpack, chronicled the lives of a group of cinephile brothers who were confined to their Manhattan apartment for 14 years. Skate Kitchen, Moselle’s narrative feature debut, brings another slice of New York’s bustling culture to the big screen: the eponymous all-girl skate group. Moselle met several members of Skate Kitchen by chance on the subway in 2015, and the film marks their second collaboration after a Venice-bound short film. The film is like a narrative-documentary hybrid as she enlists the group to play fictionalised versions of themselves; a modern cinéma vérité. It’s evident how much she admires the skaters, as Skate Kitchen blossoms into a feisty coming-of-age tale about the enduring power of female friendship in the search for identity.

FULL REVIEW ON MUCH ADO ABOUT CINEMA