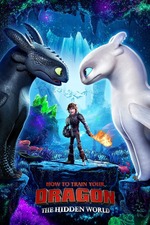 "It deserved a better conclusion. But hey..Toothless got a girlfriend?"

So this was the first ever "IT CAME FROM A PARKING LOT" movie we did for the podcast where we sat in my Prius for the first half of the recording while we waited in the movie theatre parking lot to talk about what was to come. While the premise was a little lackluster for myself, I myself was a faithful an of the series and was curious to see the conclusion.

And honestly...its a beautifully stunning film. The creature design and world building is fantastic.

But...honestly, How to Train Your Dragon 2 was a near flawless film and had set up for such a fantastic concept of a conclusion...and then this film....dropped the ball for it.

It advertises itself as "THE END" but is it really? No...it gave us a "happy ending" that seemed to be pointless for us to feel like it was the "end of dragons."

To not really go into what happened to Drago and just put in a new villain seems lazy. This film is clear to have "we had to do rewrites" so they could incorporate the poorly used idea of the "Light Wing" aka Toothless' girlfriend.

The movie has highlights but as a conclusion to a stellar trilogy, it really "drags on". For more fun and indepth review, check out IT CAME FROM THE PARKING LOT: EPISODE 1 wherever you listen to podcasts!