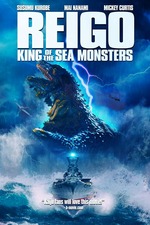 Reigo, the Deep-Sea Monster vs. the Battleship Yamato

Last month we at the podcast reviewed a monster movie that I personally have been wanting to see since I was as wee early high schooler learning the internet and of a site called TOKYO MONSTERS. Reigo was this creature feature that enchanted me due to my love of the historical record of the Pacific Conflict but also cause a truly ocean going monster was an enchanting concept.

Over a decade later, I finally was able to sit down and watch it with my best friend and a fellow podcast host who is in charge of the Garganucast, Chris.

And what do I have to say about this film? Was it worth the wait?

While I'm very happy that this film is now available in America, and added joy to the fact that it is an actually accessible movie to now get a hold, Reigo is a very indie giant monster movie.

The idea of of a "Indie Giant Monster" movie is interesting cause giant monsters are already so niche as it is, the idea of adding more layer to that niche is incredible. Reigo though does stand out as a unique entry into the genre.

While we did discuss a lot of points on this movie in the actual ICFAMMPodcast review of it, REIGO is one of those must watch for fans but probably can skip it if you are not super into the genre.

I will give high personal praise for the amount of personality they gave Reigo in this film. Its a truly tragic and almost Moby Dick-esque creature. It has motive in its actions and there is such emotion in its eyes.

The film's human plot can be clunky at times, but its doesn't sink the film.