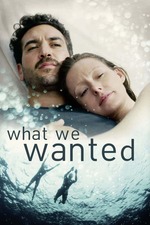 Was wir wollten is a typical Austrian film. the film starts off with a premise of a problem that needs to be resolved. as a consequence, the film moves into one direction and seems to resolve the problem soon enough. however, being an Austrian film, the problem only grows further and is soon replaced by a second problem. the suicide attempt completely overshadows the fertility and relationship issues. towards the ending, problem B somehow gets resolved, albeit not really, which leads to the couple dealing with the subject of problem A, although not resolving it.

it's an interesting topic, but the film's script is formulaic at best and the characters are rather restrained, without ever talking to each other about the underlying issues.