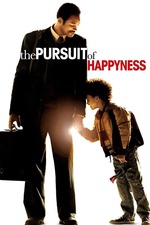 It's very easy to see why it was so successful and adored by the general audience. You got Will Smith and his son Jaden, an inspiring plot (that of course is based on a true story), a generic score that's sometimes sad and sometimes uplifting, as well as being technically very standard with absolute no special qualities whatsoever. This movie has every single cliche that could make a movie of this kind successful in the 2000s, but that's not why I think it's terrible.

I don't hate this movie or films of this kind that don't have any special qualities in them (like 𝙍𝙀𝘿 2), but I do dislike/hate many aspects of 𝙏𝙝𝙚 𝙋𝙪𝙧𝙨𝙪𝙞𝙩 𝙤𝙛 𝙃𝙖𝙥𝙥𝙮𝙣𝙚𝙨𝙨; For one, the score by Andrea Guerra is AWFUL. It's generic, cliche, annoying, completely unnecessary and just makes the entire film EVEN MORE cliche than it already is. Another gigantic issue is the narration. There are a few funny moments (like some of the ''This part is called...'', but generally it's also insanely cliche and annoying, especially because we clearly see and understand the situation and how Will's character feels without it. Even if the narration didn't exist the script is still very boring, uneventful and (you guessed it-) cliche. I'll admit I like the concept, just wish it was done better.

The best aspect is the acting, which is also not even great. Will gives probably his performance ever (either this or the original 𝙈𝙚𝙣 𝙄𝙣 𝘽𝙡𝙖𝙘𝙠), Jaden also gives his best role (not a hard mission to accomplish), Thandie Newton is farily solid as well, and the rest of the cast are all fine.

Technically, like I said- nothing special, just fine. Sometimes the cinematography by Phedon Papamichael goes documentary-style, which is completely out-of-place and just feels bland. Direction is OK, editing is OK, production and so on... OK. I feel like falling asleep from talking about this mediocre, bland, boring, decent-at-best movie. So I'll just stop here. Have a good day everyone!