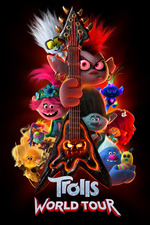 Right let me explain something to you. As the #1 Dreamworks fan around (I was literally weeping during the 25 years celebration at the beginning) I have to say this movie is probably the best movie ever made (at least until the inevitable sequel which will blow my mind again 🤯). You get to see trolls have fun. You get to see trolls give birth! You get to see the trolls dance to famous hits like “one more time” by daft punk, and it’s just as shit as it sounds.

Honestly, most of the musical numbers based on famous songs are the worst part of the movie (aside from the funny inclusion of Gangnam style). There is, however, one very good use of an original musical number that is used to mark a changing point for the main character in the second act. I liked that :). It was nice to have a main character that loved everything, and a villain that hated everything, then learn to combine. Great message for child out there.

Fuck blade runner 2049, this is the most beautiful film of all time. Everything is so hairy and there’s so much glitter to be found under every James Corden funny moment (reminder: any movie that includes James Corden automatically has a star removed from its score, Sorry! I don’t create letterboxd guidelines 😬).

Seriously though the art direction is so good that it’s actually cringe. Think about that. This is a trolls movie. The sushi vore moment was unnecessary and I’d edit that out of the movie as to not indoctrinate my children with more vore propaganda, though.

Much better than the first one.