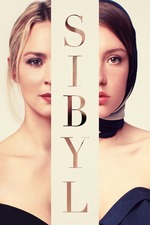 "I've never written anything based on eavesdropping", said no writer ever. Imagine, though, if it's being directly told to you, and you're precisely a psychotherapist - yeah. Sibyl takes such a premise even further, and the chaos that ensures makes for a mighty absurd dark comedy.

A glow-up from Justine Triet's and Virginie Efira's previous collaboration, Victoria, Sibyl takes its own time to build up all the nonsense, while also developing along the way some truly hilarious supporting characters - for real, Sandra Hüller is a german treasure.

Efira hypnotizes the camera and never lets go, in another raw and fierce performance that captures the viewers' spirit in a way few actors ever manage to. The long close-up at the movie premiere scene could've gone to Birth lengths, but, quite frankly it's still a single shot that on its own does really sum up all of her magic as a performer.

We're all anxiously waiting for Verhoeven's Benedetta to turn her into a global movie star, aren't we?

Anyways, this was some goddamned amusing farce of epic proportions. Should've easily taken the Palme d'Or this year!