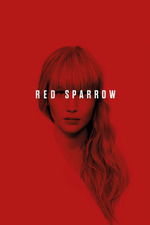 —You sent me to whore school!

I feel like this was meant to be a gritty but sexy thriller... maybe? Too bad there isn't a single character worth caring about here because your options are the-damaged-girl-who-survives, all-Russians-are-assholes, and copy-paste-CIA-types. Also, loved the moment when Dominika (typical Russian name, you know, pretty much as common as Natasha) leaves the pool, Joel Edgerton's character says something incomprehensible in "Russian" (because it literally sounded like gibberish, I'm still not sure what he said), and Dominika's response is "you speak well". I'd take that as a joke/super spy ways of seduction, but then they have a conversation about how he spent all this time in Russia so I think I was supposed to take that seriously?

P.S. Someone put Matthias Schoenaerts in a Putin biopic already, the resemblance is uncanny!