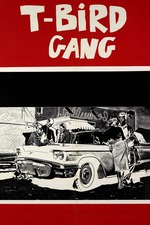 You don't go into a '50s Roger Corman crime joint expecting to be nailed to the wall by one of the best jazz scores of the era, but damned if that isn't precisely what happens here. Shelly Manne and His Men are the real stars of this show, keeping the forward momentum churning with a percussion-driven bebop soundtrack that I would 100% listen to on its own.

Edwin Nelson's gang (the script briefly calls them juvenile delinquents but everybody here is clearly over 21) kills a security guard during a heist, spurring the dead man's son John Brinkley to go undercover and try to bring them down from the inside, with the semi-blessing of police captain Coleman Francis.

It's all pretty standard stuff, but thoroughly entertaining for the genre and budget, with better acting (Nelson is especially strong as the ice-cold crime boss) and a little more style than you might expect from the early Corman factory. I'd write it off as solid but forgettable if not for that score, which injects the whole proceeding with a jazzy urgency that brings to mind its European New Wave contemporaries. Big, big ups to Shelly Manne and his band for almost single-handedly elevating this to hidden gem status.

(Note to car folks: The titular T-Bird is present but has no particular bearing on anything. They shoulda called this movie Jazz Gang.)

9 Deaths of the Ninja