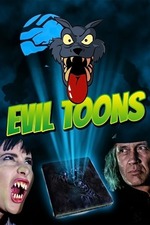 I knew that Tex Avery was a conduit for Hell all along!

I can't get over how the evil book (that's totally not the Necronomicon from Evil Dead, no sir!) is full of pictures of demons right out of the Goetia, while the main demon that haunts this film looks like the Tasmanian Devil drunk on Mr. Hyde potion.

The thing is, the "toon" theme of the film seems entirely random, and it wouldn't change much if the monster was just a generic demon. We don't even get much of him, before he possesses one of the girls and stays in that form for almost the entirety of the film. Almost certainly budget related. I do appreciate the idea (I doubt this would even be remembered if it wasn't for the animation gimmick), but it seems ultimately half-baked.

Still fun schlock for a slow friday, if you can endure sub-porn level acting (David Carradine and Dick Miller excluded).