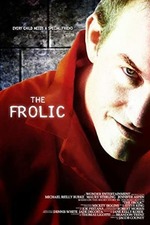 The Frolic is probably the Ligotti that suits being adapted to film the most. It's not excessively interior, and it's driven by the character's actions instead of their thoughts. Too bad it's one of his weaker stories.

The thing that drives Ligotti's stories is the neurotic interiority, with a disintergration of anything resembling stable reality, the story never coming up for air or giving easy explanations, logical or supernatural. The Frolic, on the other hand, feels like it could have been written by anyone. It feels like a competent horror story from a first time writer finding his voice, which is essentially what it is.

This short doesn't do much to improve on it. It's just a very faithful, but ultimately predictable and boring adaptation.