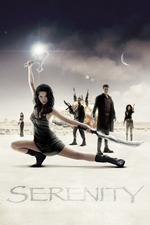 Since I've never posted on Serenity here at Letterboxd before, here's a link to the full transcript of those conversations.

And then here's my Dance-of-the-Fanboy review of the film.

Ignorance is bliss, I guess. I mean, I can't say I've been surprised that Joss Whedon's name has been caught in the net of #MeToo, but still, it hit me like yet another bruising gut punch in this Everything is Awful season. For a sweet season, Firefly was one of the unassailable joys of my life. Now, I'll never be able to look at it again without at least a vague sense of betrayal. The tagline "I aim to misbehave" now has a grotesque subtext. Why must my gender be so predictably and relentlessly loathsome?