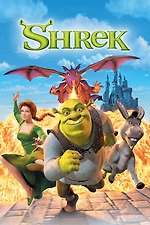 Here's a review from the archives that I've been thinking about in view of recent news.

I found Eric Metaxas's discernment lacking decades before he became an opportunistic Trumpublican and, having climbed to bestselling-biography fame with his book of dubious scholarship on Dietrich Bonhoeffer, openly embraced the opposite of everything Bonhoeffer stood for. (In case you missed it, he sucker-punched a protestor and then ran away after Trump's White House rally. The video is cringe-worthy.)

I'd been skeptical of his judgment since the early 2000s, when Metaxas preached to the culture-war-waging evangelicals that Dreamworks' Shrek was an attack on fairy tales. I responded to this misreading of the movie — a movie I found decently entertaining, but otherwise nothing to shout about — in my Film Forum column for Christianity Today. I argued that he was "missing the actual target of Shrek’s snarky and irreverent story."

"Even as it embraces a familiar fairy tale structure, Shrek pokes fun at the biggest Fairy Tale Dismemberment machine of all: Walt Disney Studios. The movie exuberantly and sarcastically skewers the clichés that have become Disney’s bread and butter, even as it pulls off some heart-warming and surprisingly meaningful storytelling of its own.

"Shrek doesn’t want us to shrug off the beloved fairy tales of ages past… or even to critique them. No, this movie is dependent on the very fairy tale models that it lovingly lampoons. Rather than condemning traditional stories, I think Shrek is slamming what Disney has done to those stories by sterilizing them.

"Disney studios and animators, with films like The Little Mermaid and Pocahontas, enforce for children that only a certain Barbie-esque look is 'beauty.' They also perpetuate a sort of pop-culture paralysis, hammering into our heads the necessity of Diva-delivered pop anthems at any emotional turn in the story.

"Worst of all, Disney force-feeds us contrived happy endings, contrary to the original fairy tales that aspire to tougher truths. Some of our best fairy tales sometimes deliver tragedy and horror as well. (Read any Brothers Grimm lately?) Disney’s relentless happy-ending hysteria sets kids up for disappointment, and puts pressure on them to live up to superficial and materialistic standards of excellence. Better to take the long, hard road to a Joyful Ending — a substantial vision of hope — than to sell young imaginations a happy ending full of artificial sweeteners that eventually cause cancer.

"While we owe many thanks to Disney studios for some of animation’s highest achievements, they have been asking for a rebuke like this for a while. Early on in the movie, when one of the characters prepares to break into a platitude-heavy pop song, the grouchy ogre furiously tells him to shut up, and the story marches on. Kids and grownups alike laughed and applauded appreciatively."