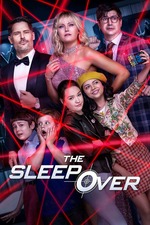 A perfectly adequate family film! Feels like something from the early aughts but not in a bad way. I mean, not in a good way either. It just feels like the kind of project that would get made in an era when the spec market was hot. Netflix is such a weird industry disruptor because they have destroyed the profit model for filmed entertainment in the name of... bloated TV dramas that don't get more than 3 seasons and middling, unpolished standalone spec film fare. What an awesome deal for creatives and audiences alike!

For the most part nothing here felt particularly original or new, but I did like the brother character and his friend – extremely solid performances from such young actors. I spent the whole movie waiting for the credits so I could recognize the name of the actress who plays the mom but it turns out I didn't know her name! Malin Akerman? She looked way more familiar to me than she was, I guess I recognize her from Watchmen and a supporting role in 27 Dresses. Anyway. I loved how important the cello was to this and especially loved the decision to have the wackiest mean girls I've ever seen on screen hurl the insult, "Shouldn't you be in rehearsal, band nerd?" in the first scene of the movie.