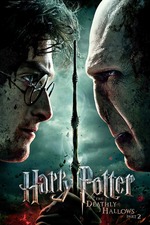 THE BEST AND MOST EPIC ENDING TO A SERIES THAT WILL EVER BE MADE.

I’m sorry I do not remember giving the final Harry Potter this much love and respect, I thought coming into it is was an exciting end to the series, a 4 star ending, but this film is as much of a masterpiece as anything I’ve witnessed.

The first and last Harry Potters win it for me, from where you start to where you finish is the most entertaining and joyful cinematic journey one can go on, I feel like a broken record but the character development in this series is simply unmatched by anything I’ve ever witnessed.

Essentially a 20 hour buildup to find out how Harry and Voldemort’s rivalry will go down, the film dedicates the entire last film to this journey that has been teased with for 7 films prior, being incredibly selective in when and why they use Voldemort within the films, making it much more of a tense build up when the final battle occurs.

The only minor negatives of this film were that I thought Neville’s speech at the end was rather cheesy and unnecessary, and Ron and Hermione’s kiss was quite underwhelming since audiences had been waiting 8 movies for something to give, but I can look past it.

The previous 20 hours gives you so much context, detail and development to feel everything in the final film and know that the entire series comes down to these precious moments, and that’s what makes this film so incredible. Individually, apart from the first film, none of the middle 6 films were masterpieces in my eyes, but they were so deeply integral to making the final Harry Potter the masterpiece it was in concluding the best series ever made. Will we ever see a series as well-made as this one? I doubt it, it makes spending all week rewatching there series all the more special when the last film delivers to the calibre that it does.

Until next time, Harry Potter.