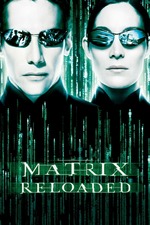 Are we all prisoners of our own destiny, controlled by fate, is choice an illusion created between those with power and those without? Living in a world without free will to decide our future now that a frightening epiphany to have.

This one defiantly lacked the same charm in both cinematography and smart plot elements that made the first one such a iconic film ahead of its time but this one still provided a great story delved deeper into the intriguing concepts of the matrix world this time more exploring themes of destiny an in-depth exploration of Neo’s evolved love for Trinity and how he must fight the fate of losing the one he loves while trying to save the remaining human race from extinction a pretty heavy dilemma that provides a nice depth of emotion to the story to accompany all the action scenes. Another strong point to this edition was all the well choreographed action sequences, there were so many great fight scenes in this one but the one that stood out the most was the highway car chase scene, like that was some adrenaline fuel fun and thrilling entertainment right there. Those albino dreadlock baddies were a nice addition to the cast they had a cool look and created a more challenging opponent for the gang to battle out which is what made some of the action sequences a lot more thrilling then the first movie. The climax was an interesting one or should I say anti climax as it ended on a cliffhanger sigh but yeah it was interesting to see Neo battle he’s destiny and change the fate of Trinity’s death along with his growing strength of power to stop the machines. Overall this sequel was a delightful treat of entertainment.

Valerian and the City of a Thousand Planets